If you’re following me on Tumblr, you’ve probably already seen these — but hey, it’s my blog and I’ll spam if I want to.

Welcome to  Seattle, Cecil et al! Last night my sister and I, along with various friends, went to the first live show of the WTNV West Coast Tour. I dressed up as fem!Cecil, and she was a member of the Sheriff’s Secret Police (complete with working blowgun). TONS of great costumes: there were several Glow Clouds, a couple Dog Parks, at least one Hooded Figure, and Cecils and Carloses and Interns of every description. koshekhs-purr on Tumblr has a lot of nice collections of people’s photos from the night — turns out there were also some Eternal Girl Scouts, a Faceless Old Woman Who Secretly Lives In Your Home, and multiple Kevins. I am slightly disappointed that there was no Hiram McDaniels.

The Sheriff’s Secret Police released a statement this morning. We … can’t find it. I think it’s somewhere in the studio’s air ducts. I can hear it scratching.

The Sheriff’s Secret Police are approachable, helpful, and recognizable in their balaclavas, short capes, and blowdart bandoliers. (Blowgun actually functions.) 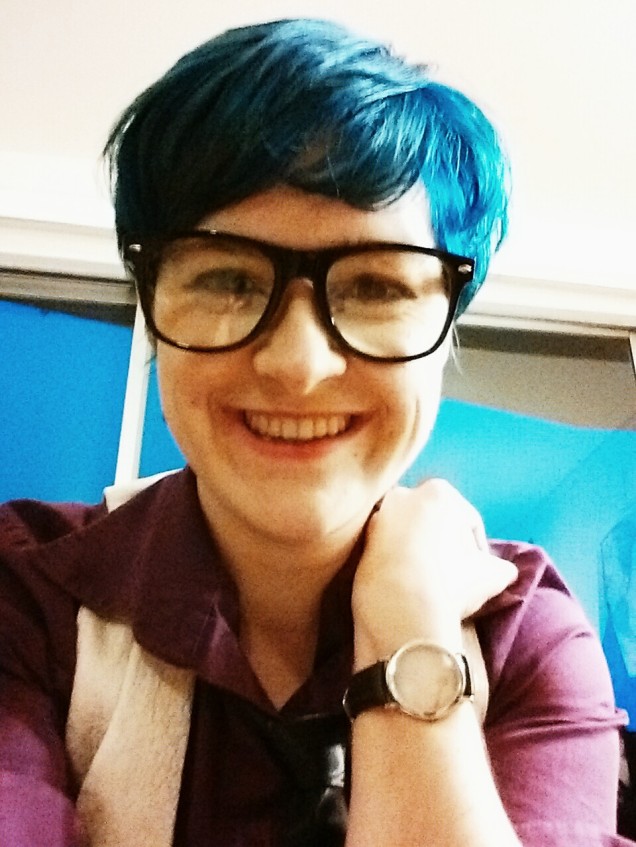 Carla the scientist says that none of the clocks in Night Vale work, but mine tells time perfectly! It tells me time is transparent. Invisible. Unknowable. Breakable

For those of you who’ll get to see the show live, you are in for a superb experience. For those of you who’ll get to hear a recording or read a transcript, you’re in for a great episode. Here’s hoping the musical guest, Jason Webley (of Episode 9, “Pyramid”), keeps his voice; he was really shredding his vocal cords, and he had another show immediately after the one we attended.

(If you are not seeing it live, go listen to Jason Webley’s giraffe song now, because it was my favorite part of his set.)

But what’s really remarkable to me about WTNV is that on what TV Tropes calls the Sliding Scale of Idealism vs. Cynicism, I think Night Vale actually falls slightly on the idealism/optimism end of the scale. This sounds weird, given that so much of the writing dwells on things like the senselessness of fate, the inevitability of death, and the near certainty that there is a spider on you right now. Yet what Cecil comes back to over and over again are ideas of connections between people, of the reality of the present moment as opposed to mistakes of the past or uncertainties of the future, of the ability of people to survive and endure — all of which are no less terrific and surreal and unbelievable than Glow Clouds and black helicopters and Whispering Forests. Samuel Beckett taught me about existential dread; Night Vale reminds me that the fleeting nature of existence doesn’t actually mean it’s meaningless.

The arc of Night Vale is upward. In the most recent episode, Cecil points this out, commenting “Usually, after the weather, I am here to tell you about how we have been saved from some world-ending danger – that, for whatever reason, has failed again to end our world.” And after the weather last night, Cecil talked to us about fear — about when it’s useful, and when it’s not — and led the audience in turning to a stranger sitting nearby and reminding them, You are alive. It was nice to meet you.

If you can hear my voice speaking live, then you know: we are not history yet. We are happening now. How miraculous is that?
-Episode 4, “PTA Meeting”

3 thoughts on “You have nothing to fear: Welcome to Night Vale West Coast Tour”