I have this nervous tic where I fold cranes. Any suitable piece of paper — paper napkin rings, foil candy wrappers — I’ll trim and tear it down to a square and start folding. Corner to corner, corner to corner, flatten, open, mountain fold, valley fold. I think I got into the habit around high school, when I stage managed a show set in a circus: huge inch-and-a-half wide confetti pieces were scattered all over the set, and I’d sit backstage sweeping them up, fidgeting and folding.

Right now I’m stage managing again, assisting on Book-It’s The Brothers K. Any rehearsal process has a certain amount of hurry-up-and-wait to it, whether it’s waiting to finish table work or waiting for the next scene transition. And when I’m waiting I either fidget or I get distracted by something with a screen. So a few weeks ago, I dug out a pack of small origami paper my mother gave me a while back, and I started making cranes.

First I finished up that pack — a little less than half the paper had already been folded and the cranes probably given away to someone or other. It didn’t take me nearly as long as I might have hoped to get through all the paper, and then to string the finished cranes together. And since it had taken so little time, I decided hell, I may as well make a thousand. 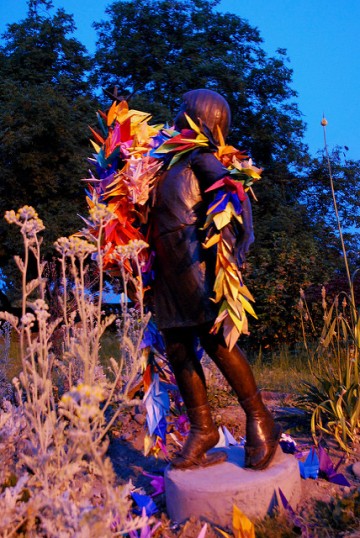 A group of one thousand paper cranes is called a senbazuru. They’re considered good luck symbols, and according to some sources, if a person folds a thousand cranes in a year, they are granted one wish. Famously, a young survivor of Hiroshima named Sadako Sasaki folded a thousand cranes after she was diagnosed with radiation-induced leukemia. Sadako and her cranes have become a symbol of a global longing for peace. I used to walk past the statue of her in the University District on a regular basis. She’s always draped with strings of cranes of every size — paper wishes, bright in Seattle’s rain and mist.

I’m superstitious enough to feel like most wishes are best kept to the wisher’s self. But it does seem appropriate, while working on an anti-war play, to fold these cranes with an anti-war intention. Or, more positively, a peaceful intention.

The prismatic string on the left here, hanging on our callboard, that’s the leftover paper I started with — probably a hundred or a hundred and fifty cranes. The string on the right is 272 cranes, the first pack of paper I finished and strung yesterday. 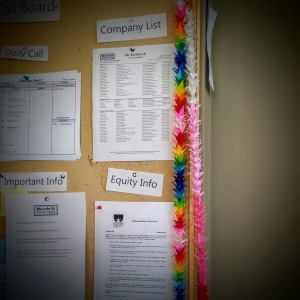